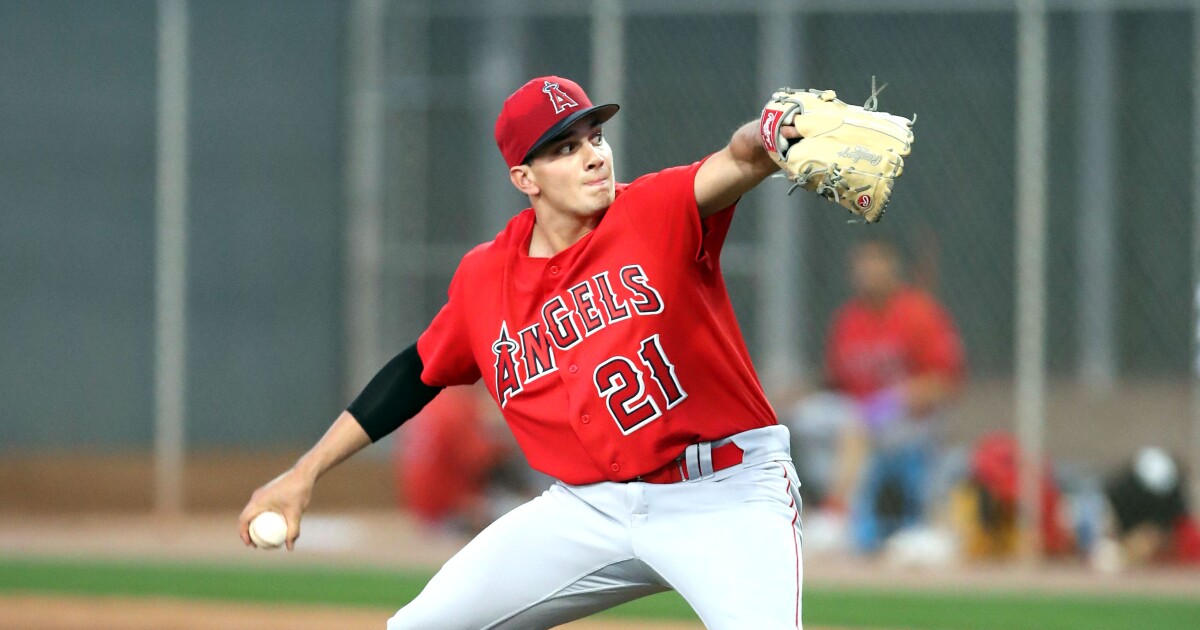 Editor’s note: This is the first in an occasional series of stories about how the coronavirus shutdown has affected minor league baseball players.

Angels minor league pitcher Chris Rodriguez was nowhere near a mound the last two summers. Now that he has overcome a back injury that claimed his entire 2018 season and forced him to have surgery to repair a stress fracture after three starts in 2019, Rodriguez is ready to pitch in a game again.

And he might get the chance soon. Rodriguez was included in the Angels’ 60-man player pool announced Sunday, meaning he’ll work out at the team’s alternate facility with other non-roster minor leaguers.

The news shocked Rodriguez. For months, Major League Baseball has been grappling with the near certainty that thousands of minor leaguers will not accrue valuable game experience this summer. Officials are considering expanding the Arizona Fall League to help make up for the lost season. If an agreement isn’t reached, the Angels will consider beefing up their instructional league efforts, general manager Billy Eppler said.

Rodriguez had resigned himself to the possibility of spending another season on the sidelines.

“I thought for sure with everything that is going on, how tragic it is with the coronavirus [surging], I didn’t expect there to be a way for me to play during the season,” he said on the phone Sunday. “When I got the call, it was a relief, just being able to play after rehabbing for two years in a row and being able to show what I got.”

Rodriguez, 21, was drafted in the fourth round out of Monsignor Pace High in Miami Gardens, Fla., in 2016 and the Angels paid him an over-slot bonus of $850,000. The right-hander progressed swiftly enough to reach a full-season affiliate within 14 months of signing.

Back problems surfaced in the spring of 2018, derailing the linear path Rodriguez had been charting to the major leagues.

Yet Rodriguez is optimistic about his future. So are the Angels.

Despite having appeared in three games since 2017, Rodriguez has remained one of the team’s highly regarded prospects. Team officials gush about his competitiveness and his command of a large repertoire. He showed off those qualities for high-A Inland Empire last April, touching 97 mph with his fastball without letting his secondary pitches suffer. Before surgery, he struck out 13 batters and issued four walks without giving up a run in 9 1/3 innings over three starts.

Before the novel coronavirus ended spring training in mid-March, Rodriguez was again commanding interest — this time on the lower fields of the Angels’ facility in Tempe, Ariz. He was pitching at full intensity, stronger than he had been the last time he was healthy. The core strengthening work he started in his rehabilitation last summer paid off every time he let a baseball loose.

“Stuff was, I feel like, the best it’s been,” Rodriguez said. “I was super pumped.”

“I’m just excited for when the time comes and we can get him back on a mound and pitching to hitters,” Eppler said. “That would be good to see. Even in spring training in his live batting practice sessions early, he was making some noise on the lower fields.”

Rodriguez had propelled his career forward after spending most of the previous two years throwing in pain. He had to find other ways to improve. When he couldn’t even play catch post-surgery, he lay on his bed and threw baseballs above his head. He used those sessions to work on his pitch grips.

At least he was able to stand upright while throwing during thelayoff.

After spring training was canceled, Rodriguez worked out alongside players he grew up with in Miami and friends he made in the minor leagues. They played catch on a grassy field and threw off a mound they built in the backyard of a catcher who plays in the Cleveland Indians’ farm system. Rodriguez worked out in the garage of his parents’ home, which he outfitted with dumbbells, weightlifting bars and plates and some machines.

“Everything’s feeling really good,” he said. “I’m feeling really strong. Being at home helped because I was able to really concentrate and do what I had to do.”

The setup was enough to keep Rodriguez on track.

Now the Angels will keep a closer look on him as he works out with other prospects. Although it’s unlikely he’ll be ready to pitch in a major league game, he conceivably could find himself on the mound at Angel Stadium.