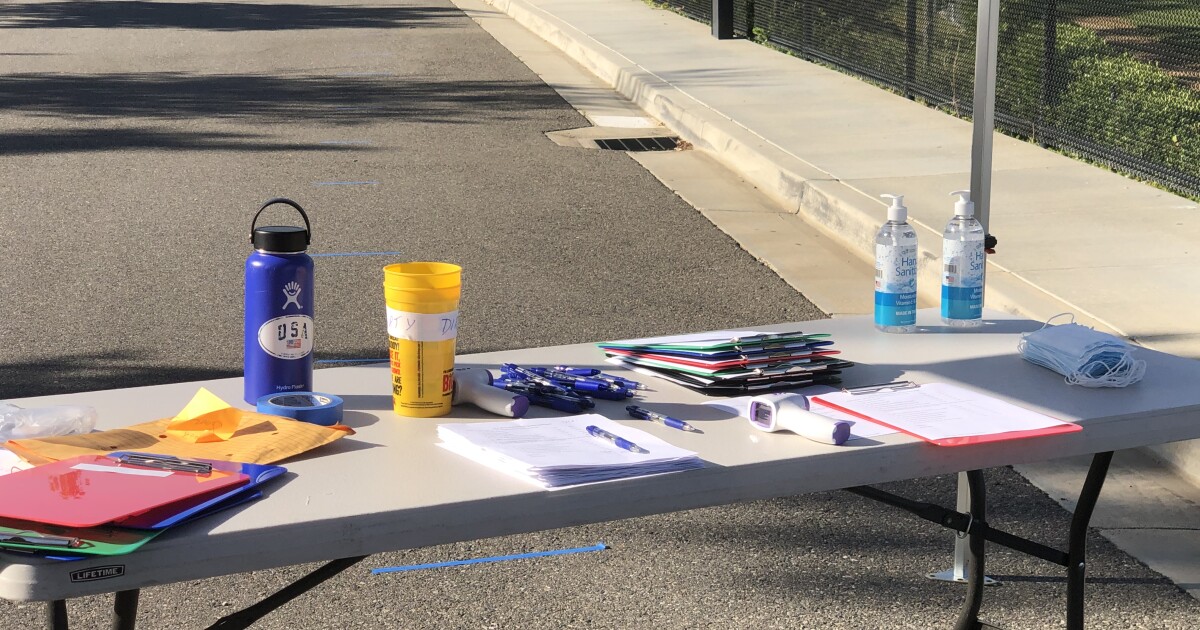 It’s another week of conditioning for high school athletes under strict safety guidelines and another week of tension as players, coaches and parents wait to see whether or not fall sports might be played during the COVID-19 pandemic.

Chatsworth Sierra Canyon’s football team, which became the first in Los Angeles County to begin workouts June 15, is continuing to take players’ temperatures before every workout, not allowing footballs to be shared and working in groups of 10, according to coach Jon Ellinghouse.

“We’re status quo,” Ellinghouse said. “We’re trying to keep as safe as we can. We’re following the guidelines.”

Coaches are concerned that athletes are working out or participating in gatherings run by private coaches who don’t follow safety guidelines such as social distancing, wearing masks and paying attention to strict cleaning of equipment. That’s creating tension because high school coaches don’t want their environment compromised.

The conflict between high school coaches and private coaches could grow, especially if the California Interscholastic Federation announces a delay in the fall high school season. That would empower travel coaches to become far more involved if no high school sports are taking place. A decision is expected by July 20.

“I don’t have any control over what people can do on their own,” Lancaster Paraclete football coach Dean Herrington said. “People are fed up [with the shutdown]. I’ve never received more emails and calls from parents saying, ‘We need to start practicing.’ ”

Out of an abundance of caution, schools have paused summer practices when concerns arose about possible exposure to COVID-19. Simi Valley paused girls’ volleyball practices and Sherman Oaks Notre Dame football stopped workouts for 14 days. Simi Valley Royal halted workouts for one of its teams after a coach tested positive.

Basketball, softball and baseball tournaments run by travel coaches are taking place this summer around the country, something high school teams can’t participate in. Southern California athletes have traveled to Arizona for basketball, baseball and softball games. Football athletes have participated in showcases with close interactions in direct conflict with school guidelines. The tournaments are taking place even though the NCAA extended the Division I college recruiting dead period through Aug. 31.

Everyone, from coaches to players to parents, wants clarity on a high school season so they can plan ahead.

“There’s a lot worse things going on, but it’s difficult for planning,” Ellinghouse said of not knowing when the football season might take place. “We’re trying to be on our toes and be ready to adjust. Our kids did a lot of sitting around and Zoom calls. Getting in shape and in condition is not a bad thing.”

West Hills Chaminade receiver Jordan McIntyre is in his second week of conditioning drills with the Eagles.

“It was tough, but it’s going to help in the long run whenever the season comes,” he said. “It was all conditioning. No one was bored but it was very tiring. We’re still waiting on CIF. I think the strangest part was social distancing and keeping our masks on for warm-up.”

“It’s almost like everyone is working with a different set of rules,” he said. “I haven’t touched a baseball in four months other than with my son. I would do anything to get back on the field, but I have to do it right or I’d lose my job. If I have to wear a double mask and kids have to be tested, I want kids on the field.”