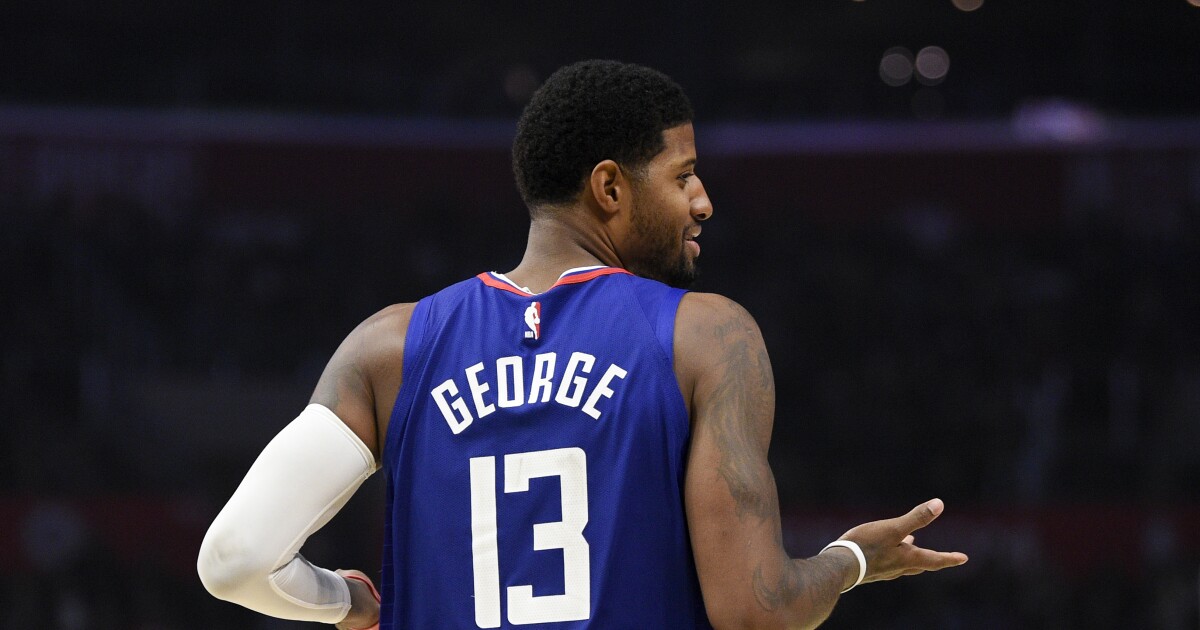 Even though nearly six months had passed since a surgeon repaired both of his shoulders, what little rust Paul George showed during his Clippers debut last fall belied how he felt.

George scored 33 points in 24 minutes on Nov. 14, then needed only 20 minutes to score 37 two nights later. Yet the points, and the ease with which he scored them, masked what George called insecurities about his recovery.

Upon his arrival with his Clippers teammates to Disney World on Wednesday ahead of the NBA restart, there were many questions to consider.

Will the league’s so-called “bubble” environment allow the resumption of games to happen July 30? Can the Clippers pick up where they left off in March, when they were second in the Western Conference standings when play was suspended because of the coronavirus pandemic, their championship aspirations on full display?

George, however, has no more lingering doubt about his health.

“The whole season, all the way up until maybe a month or two ago, I had to always do shoulder rehab stuff, warming the shoulder up,” George said Friday. “Just so much stuff went into stuff I had to do before I actually took a foot on the floor. Now I feel great again.

“I feel great going on the court, shooting, doing regular things. Just confident in that — feeling back to myself again.”

The Clippers as a whole began to feel more like themselves Friday. After clearing the mandatory in-room quarantine, they held an evening practice that was their first as a team since March, and more reinforcements are scheduled to arrive soon. Leading scorer Kawhi Leonard was expected to arrive Friday, coach Doc Rivers said, after tending to an excused family matter. Reserve forward JaMychal Green will arrive Sunday after dealing with his own family matter, a person with knowledge of the situation said. Reserve guard Landry Shamet remains in California in “corona quarantine,” he said on social media, and center Ivica Zubac also has yet to arrive but will eventually, a source with knowledge of the team’s travel party said.

The Clippers eventually will have 15 players in Orlando, two fewer than allowed, Rivers said. The team did not bring rookie forward Mfiondu Kabengele or center Johnathan Motley, who is on a two-way contract. Two-way rookie guard Amir Coffey, whose defense and transition offense showed promise late in the season, is part of the 15-man roster, however. Acting on a belief the NBA will allow teams to bring additional staff members to Florida as the playoffs go on, Rivers said the team cut the number of coaches in its initial travel party in order to load up on medical personnel. Coaches who are in Orlando are assistants Sam Cassell, Rex Kalamian, Tyronn Lue, Jeremy Castleberry, John Welch and Armond Hill.

“It’s awkward for everybody,” Rivers said about the circumstances of the restart. “But we’ve decided to come here. We all had to make an individual decision to come down to Orlando. Once we got here, we decided this is our mission. We’re just here, we’re going to try to drown out all the stuff that distracts us from our goal. ”

While George was using the nearly four-month hiatus to work himself back to shape, he was helping his teammate and close friend Reggie Jackson do the same.

When the season was suspended because of the coronavirus on March 11, Jackson was living in a hotel because the former Detroit Piston had signed with the Clippers only three weeks before. In the weeks and months that followed, Jackson wanted to return to Michigan, where he had training equipment at his house and a private chef ready to whip up options far better than takeout. But Jackson ultimately stayed at his hotel, where he dribbled a basketball on carpet and left only to run trails, ride a bike and shoot on a court at a house George owned but did not live in.

“I would bother him about going up there and just being able to at times shoot on an outside court,” Jackson said. “That was kind of my way of working on basketball. Of course, it’s not regulation or anything, but just to keep my sanity. ”

For the Clippers, a best-case scenario means living on the Disney World campus until the finals in October. For Jackson, that would mean several more months in a hotel. Some of his teammates prepared for the potentially long stay by outfitting their rooms with unique items from home. Lou Williams brought music recording equipment. Center Montrezl Harrell brought a portable sauna, Jackson revealed, calling his teammate a “forward thinker.”

“I’m not going to lie, I don’t think anybody likes these circumstances or loves it, but I’ve accepted it,” Jackson said. “I have to be here. I have undergo everything ,what everybody does to do something that I love to do, which is to play the game of basketball. I’m enjoying that.”

George said he felt “mixed emotions” initially about participating in the restart out of concern over social justice issues but said he ultimately believed the exposure would amplify players’ voices.

“Spotlight is on us,” George said. “We’re opening back up the sports world. With that alone we should have more than enough of an opportunity to get our message and our points across.”

The spotlight will shine brightly on the Clippers as they attempt to regain the momentum they’d displayed in March. Echoing the confidence he expressed with his shoulders, George suggested his teammates will be ready.

“It’s just great to be around the whole group at once,” he said. “We’ve been waiting for this moment for a long time.”