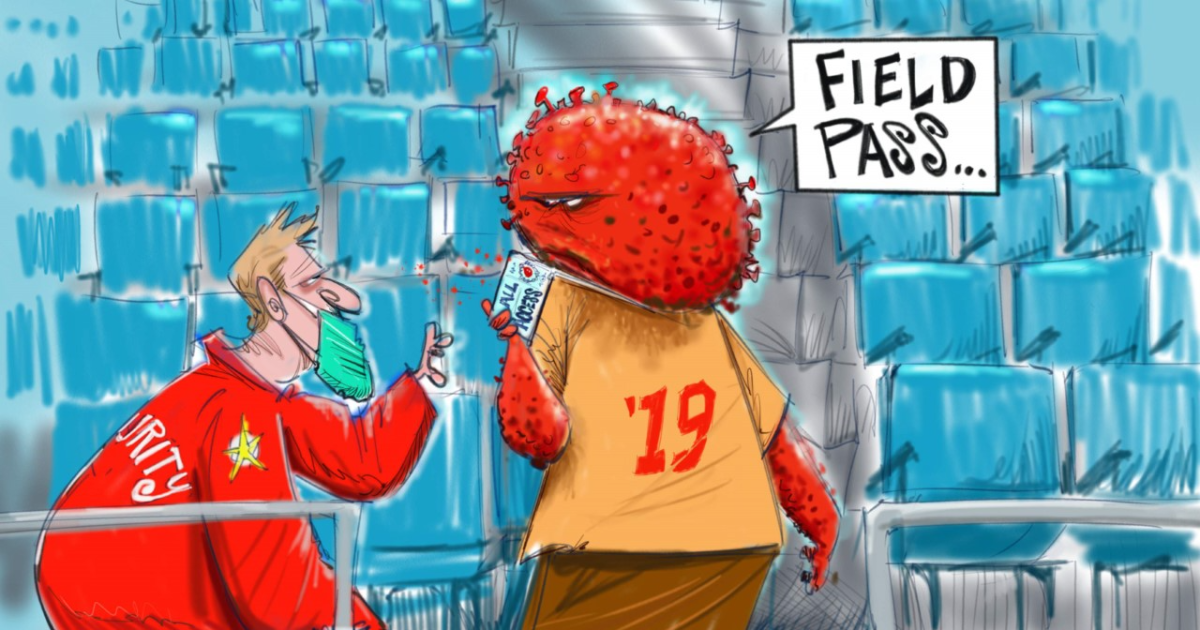 Baseball keeps moving further and further away from its fans. The majority of fans around baseball love what Joe Kelly did to the Astros. So, instead of punishing the Astros’ players six months ago, the commissioner punishes the player who did that job for him.

The protection that Andy Dufresne received from the guards at Shawshank State Prison pales in comparison to the service Rob Manfred is providing the Houston Astros.

Not a single player was suspended for a single game by Commissioner Rob Manfred even though the Cheatros embarrassed his sport, stole a championship and showed minimum remorse. Conversely, wildman Joe Kelly is suspended for eight games (really 22) for a couple of “message” pitches that have been part of baseball for 150 years. With each weak-kneed, feckless decision, it turns out Manfred is the real embarrassment to baseball.

Why were the Astros so surprised and upset that Joe Kelly threw that pitch over Alex Bregman’s head? Didn’t they already know ahead of time what pitch was coming?

Joe Kelly “a hero?” Really? For nearly beaning two guys, maybe ending their careers, or worse? Did someone hit Bill Plaschke in the head?

Bill, Bill, Bill. Joe Kelly is a hero for his bush league move of throwing at an Astros hitter? The same Joe Kelly who gave up the grand slam to Howie Kendrick in last year’s playoffs? And now is suspended for 10 games when teams are relying on their bullpens? I don’t think so.

And one more thing Bill, it’s time to get over the 2017 World Series loss. The Dodgers choked that away.

Next season, when the Dodgers announce their opening day pitcher, if it is Clayton Kershaw, the should pencil in on the starting lineup the name of the pitcher that will be taking his place

The Miami Marlins have been hit hard by COVID-19, causing not only them but other teams to postpone games. How long will it take for Vegas to set a betting line on the over/under for games postponed each day? This is not meant to be funny, more to highlight the seriousness of playing sports under these unpredictable conditions.

Bob Uecker used to joke that “if we stay healthy, we’ve got a good chance of finishing out the schedule.”

It’s no longer a joke.

We should cancel all sports until such a time as it is deemed safe to resume play. The longer we live in this state of denial about how deadly the virus is, the more players will become sick and potentially die as a result. Maybe we should also ask how many players need to die before sports are shut down.

The new rules in baseball for this season range from the perverse (starting an extra inning with a runner on second base, giving new meaning to “unearned run”) to patently unfair (forcing a team with the best regular season record to participate in a two-of-three-game crapshoot with a dubious fanless “home field advantage”).

Anyone who has witnessed a player called out on a third strike six inches outside knows that what baseball really needs now is an electronic strike zone, which would have the added benefit of allowing the plate umpire to social distance from the catcher.

Dylan Hernández gripes that the 60-game baseball season is a sham. Actually, it’s his column that’s the sham. In case Hernández isn’t aware, many of us have been house-locked for almost five months. That’s because there’s a lethal pandemic out there wanting to kill us. We’ve been watching a lot more TV than usual. Sports provides a relief from routine dramas and comedies, providing its own form of drama and comedy.

Sure the abbreviated sports seasons are aberrations but it’s still sports. We can still enjoy the athleticism despite fake noise and cutout fans. Hernández’s column insults us all.

Lou Williams’ story that he was in a strip joint simply to sample the fine cuisine rivals Jeff Kent telling the Dodgers (or was it the Giants?) he slid off his truck after waxing it and broke his wrist. Turns out Jeff was riding dirt bikes and wiped out, trashing a few bones in the process.

Most of us understand the need and fight for expressing a message on your uniform and that’s OK, but I think the placement should be consistent. Say you’re an 8-year-old fan, or any age for that matter, you want to know who’s got the ball and/or who’s defending. Not all of us know all the players by sight.

We want and need to see the players’ names on the back of the jerseys so we can identify and follow along easier during the games.

I would say put the messages on the fronts, either left or right of the team name. The games are already a shell of themselves, why not make it easier when you can?

A Times letter writer recently suggested the Washington Football Team adopt the “Hypocrites” name to aptly characterize the city in which they play, which — while accurate, is politically generic. If the Franchise chooses to honor the tradition of the former name, best go with the “Promise Breakers.” No Native American could possibly object.

While thrilled that a women’s pro soccer team is coming to Los Angeles, I was startled to read about possible collaboration with the Galaxy. Let’s hope that any such links won’t have the new team playing at the Galaxy’s Dignity Health Sports Park. Dignity is known for denying reproductive health services to women and LGBT people. Let’s hope that no female owners marketing a team to women and LGBT fans and players would think that affiliating with Dignity Health is a winning strategy.

Not his cup of tea

Our professional athletes need to watch how far they’ll go in supporting others who believe in lawlessness, destruction of property, and the defunding of our police, because those of us who don’t believe in these things are getting much closer to turning our attention away from pro sports.

Regarding Fox’s telecast of the Dodgers vs. Giants this past Saturday: :

Was this a Hollywood production or a Major League Baseball game? The game already had fan cut-outs, canned cheering, the announcer and organist, but Fox adding virtual fans? Really? We all know it’s a season unlike any other, so why make it look and sound like all the rest? Let us hear the pure sounds of the game on the field. The crack of the bat and the snap in the glove. Mic the players, umps and coaches. Now that’s a production I would back.

Never in a million years did it seem possible, but Alex Rodriguez makes me miss Booger McFarland.

I told my doctor I was depressed and not feeling well.

He said I needed some excitement in my life.

Thursday, I watched the Dodgers and Lakers on TV.

Best medicine I ever had. All better.

The Los Angeles Times welcomes expressions of all views. Letters should be brief and become the property of The Times. They may be edited and republished in any format. Each must include a valid mailing address and telephone number. Pseudonyms will not be used.